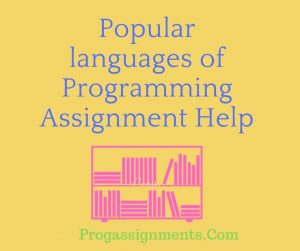 Python is the easiest language which you can learn easily as its importance is increasing and showing rise in popularity because of Google’s investment in past years the Python language of programming are taught in US schools. If we want to take an example of the applications which are used in android applications these are Pinterest and Instagram which are built by using Python language programming.

SQL, its abbreviation stands for “structured query language, it is consider as database query language. Any software and applications which has massive data, SQL will helps you to interact with that type of data. In software development, SQL offers a nice package to programmers. In other words, it is not used alone. You must have other programming knowledge in order to work on SQL. Try to learn some other languages of programming which helps to invoke SQL.

A C programmer will communicate with his co-workers in different countries, they will use computer language which is more understandable for them rather than the verbal languages which are used in common.

Like many languages has syntax, ruby also has the same type of syntax. Ruby is that type of programming language which supports various platforms. These platforms are Mac, Linux and Windows. There are so many languages which are connected with Ruby for example Perl language or small talk. It is easy to use and easy to implements. Anyone using this type of programming can use it freely and directly.

PHP is used when the data is heavy. If any person is creating many websites or developing applications then it is used. Sites like WordPress and Facebook are its example. PHP using open source language, which is easy to use.